by Simon Gay, Tim Hart, Graham John and Ben Johnson
Adapted from an article that appeared in The Ringing World in December 2020

Way back in March 2020, before anyone had heard of online ringing, the state-of-the-art for handbell simulator practice was a pair of ActionXL motion sensors (Figure 1) with Graham John’s Handbell Manager software connecting them to Abel. By September 2020 we were selling eBells (Figure 2) which can be used with Handbell Stadium and, via Handbell Manager, with Abel, Beltower, Ringing Room, Muster and Ding. This tells the story of how we got there. 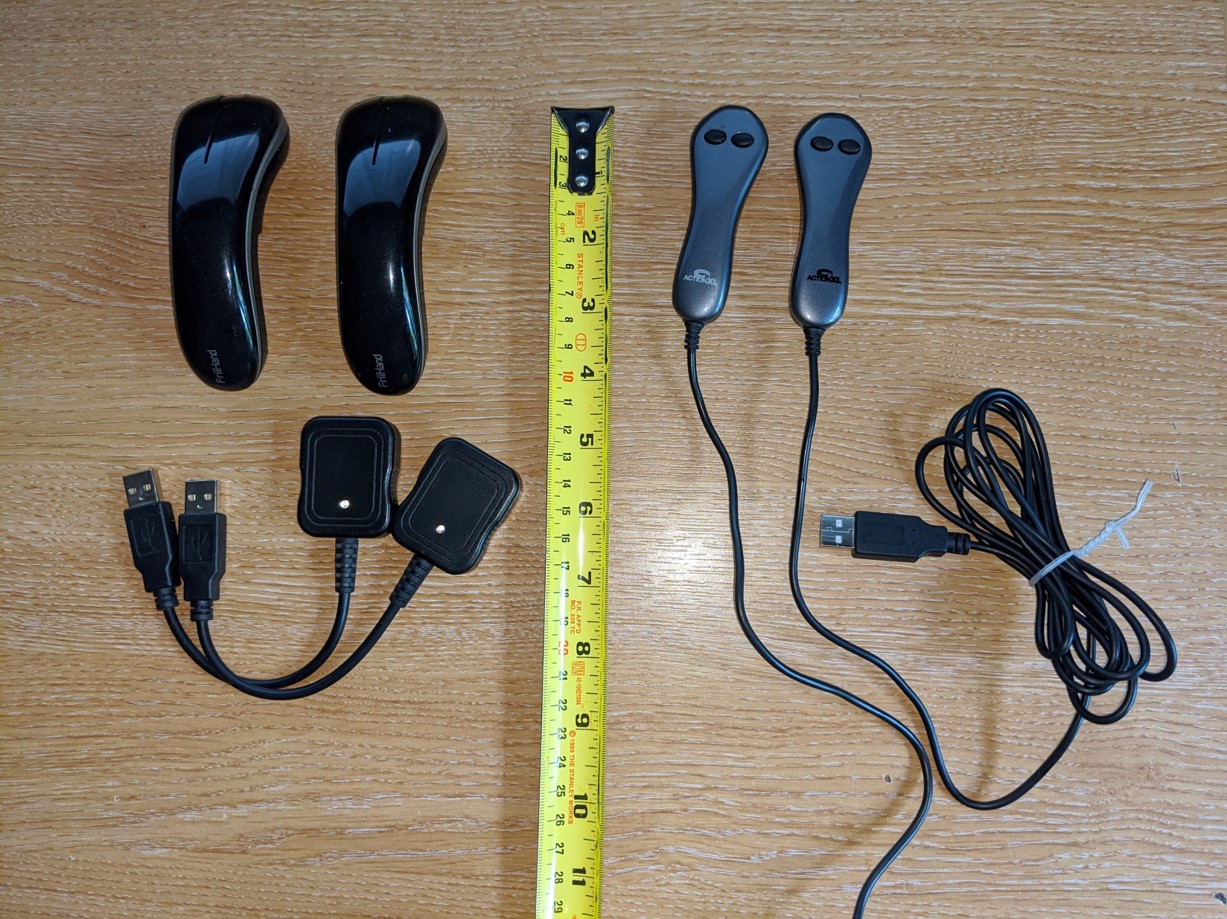 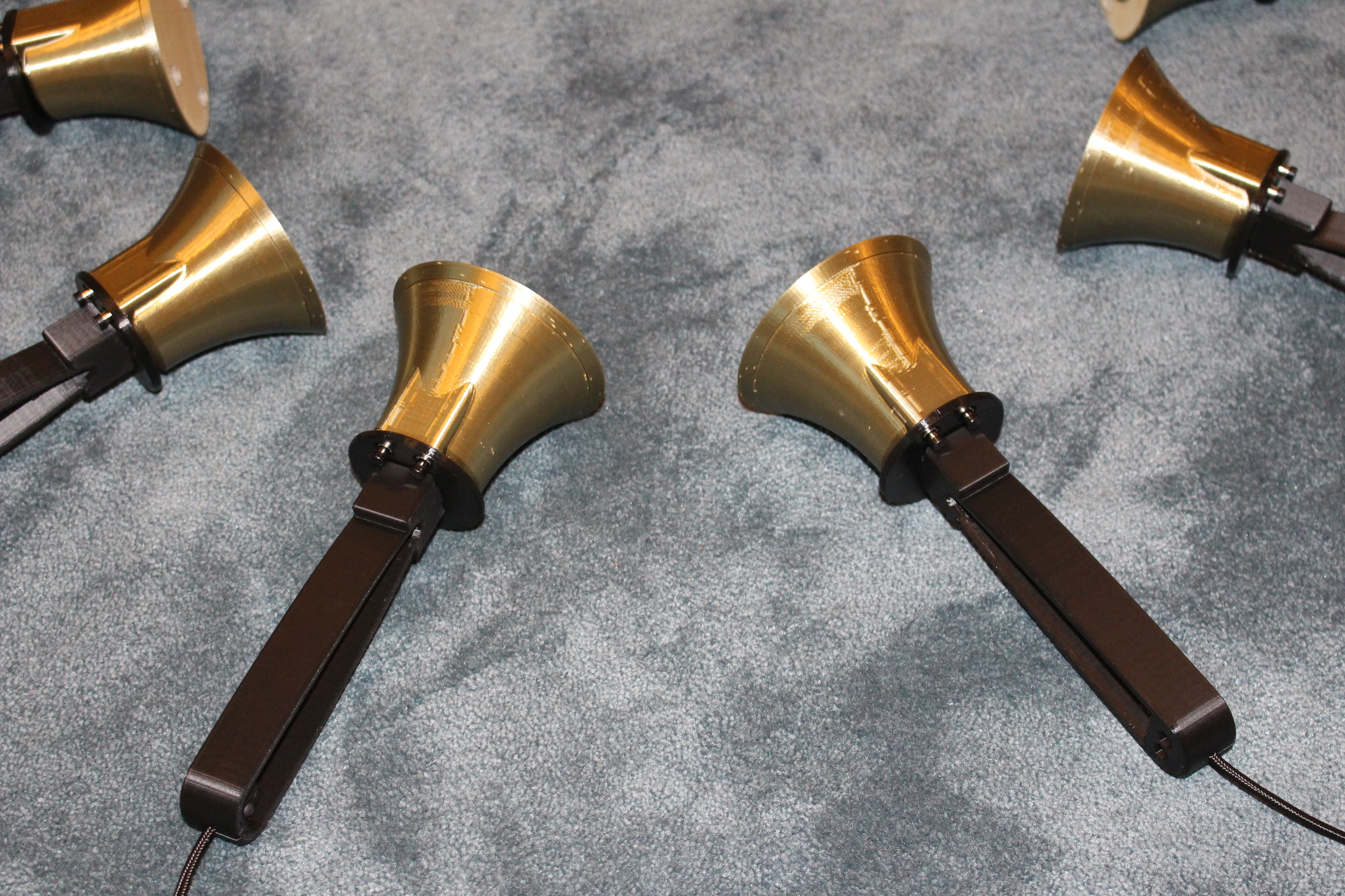 
The ActionXL controllers became available about 12 years ago, and Graham developed Handbell Manager to enable them to be used with Abel. After a few years ringers seemed to be the main buyers, and Graham effectively became the UK distributor. About 600 pairs have been sold to ringers and used with Handbell Manager, often attached to heavier objects to give a more realistic ringing feel.

Shortly after the beginning of the first Covid-19 lockdown in March 2020 there was an explosion of development in online ringing platforms. Graham started working on Handbell Stadium, releasing a 2D version in March and a version with 3D graphics in late April. This led to wider interest in the use of motion sensors. The remaining ActionXL sensors quickly sold out, and Graham began discussions with the manufacturer to gain access to a prototype of a new version.

Meanwhile, other ringers began experimenting with ways of connecting motion sensors to ringing simulators and online platforms. Richard Johnston developed software to enable a pair of mobile phones to be used as dummy handbells. The 3D version of Handbell Stadium was released for Mac as well as Windows. At this point Simon Gay, a Mac user, got interested and developed a dummy handbell based on a hobbyist electronics board called an Arduino (Figure 3). This is fairly easy to put together with no experience of electronics, and several people made sets from instructions on Simon’s blog. 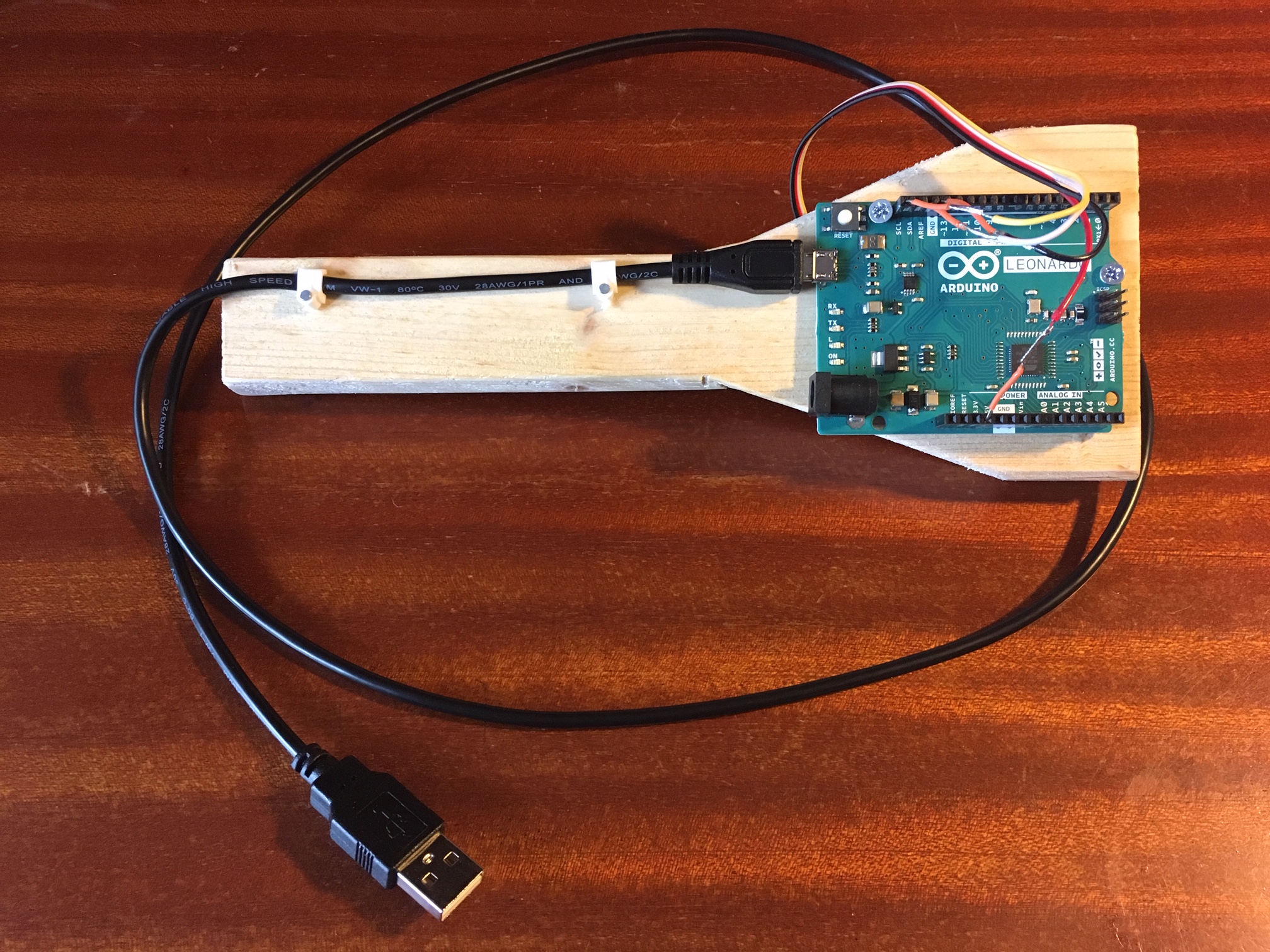 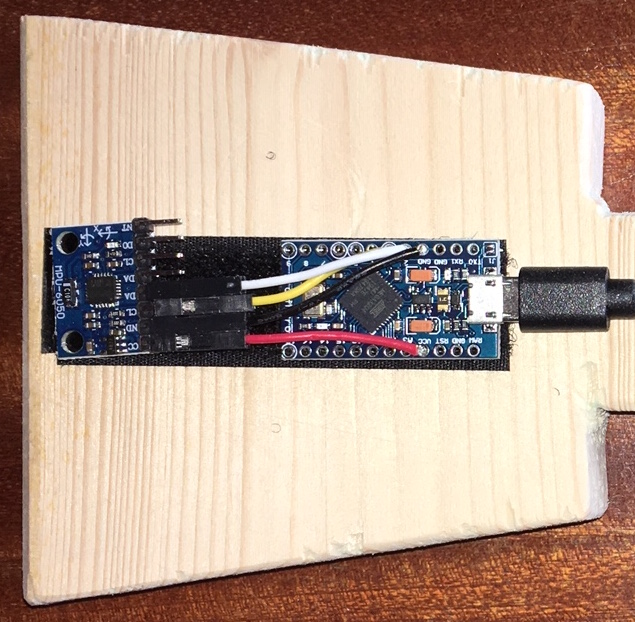 
The next step was to use a smaller and cheaper version of the Arduino, which however requires some soldering – Simon was getting more confident with his long-lost electronics skills. The software was the same and the board was still mounted on a makeshift wooden handbell shape (Figure 4).

Soon afterwards, Tim Hart and Ben Johnson joined in by designing dummy handbells that could be made with 3D printers, and the Arduino boards fitted inside. Tim’s design (Figure 5) was all plastic, initially using colours that he had on hand. These were dubbed “tulip” bells. Ben used a wooden handle and a shiny metal-effect plastic for the bell, and experimented with a realistic bell shape and a more compact version (Figure 6). He included two buttons, like on the ActionXL controllers, for start/stop and bob/single controls. 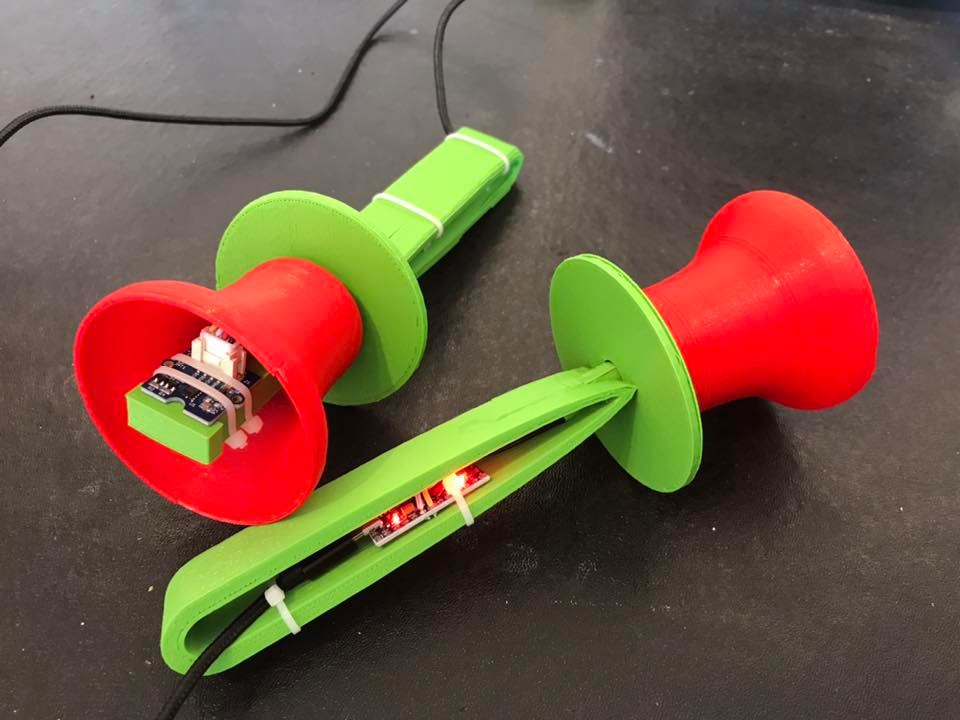 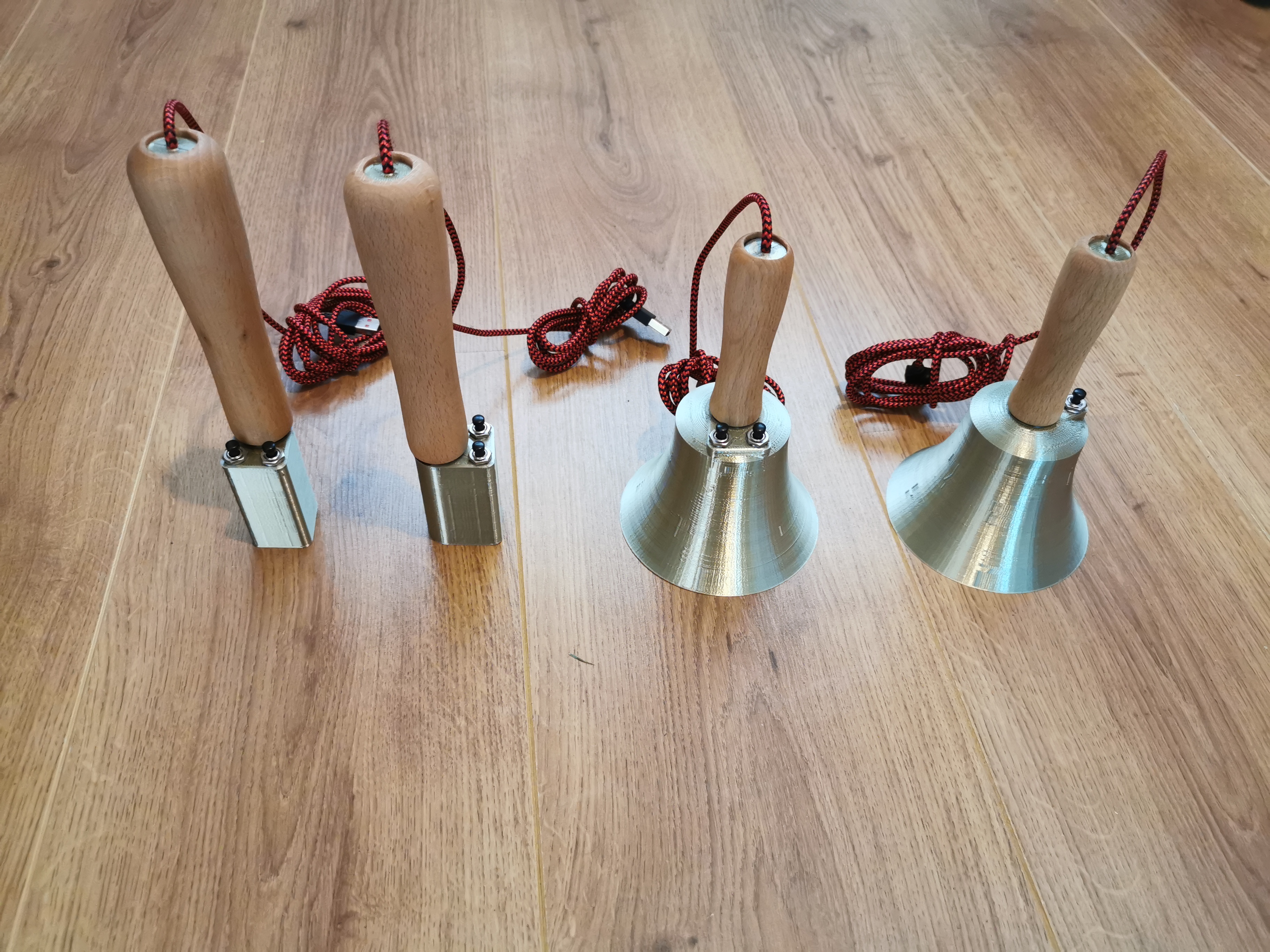 
The final design of the eBell is based on Tim’s handle and Ben’s bell. The electronics board is completely hidden, and the base of the bell contains a metal disc so that the overall weight is the same as a mid-sized handbell. Although ActionXL has always been interested in ringers’ use of their controllers, they decided not to proceed with a new version, so the eBell uses a small Arduino with a motion sensor board that combines accelerometers and gyroscopes to accurately detect the ringing action. Simon’s original software has been adapted by Graham alongside modifications of Handbell Manager and Handbell Stadium, and the motion sensing has several modes to suit different ringing styles.

eBells are made in a “cottage industry” style with 3D printers (Figure 7). This is a relatively slow process, as printing the components for one bell takes around 14 hours and the assembly process involves 36 components and a fair amount of glue (Figure 8). There isn’t enough demand to make it cost-effective to use injection moulding, which would be the normal way of mass-producing plastic items – but also, 3D printing enabled us to refine the design based on feedback from early users. 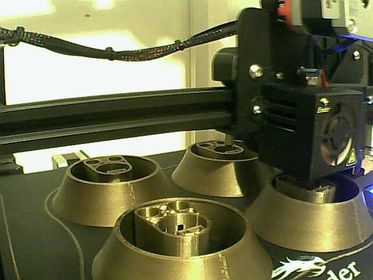 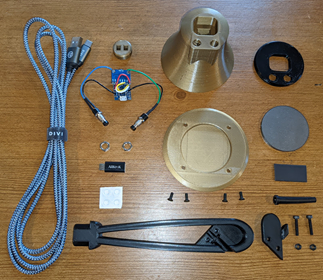 Figure 8: The components of an eBell


It is also possible to take a DIY approach. Simon’s original design (Figure 3) is easy to build and would save up to 50% of the cost, depending on where you get the components. If you are confident with soldering, the small Arduino (Figure 4) gives you a neater package. If you also have a 3D printer, all the designs for the eBells are freely available on GitHub and you can make your own.

Most Ringing Room users are doing “tower bell” ringing with one bell each. It’s possible to do this with one eBell, which is easier than pressing the keyboard and gives you a proper handstroke and backstroke. This helps with keeping track of where you are in a method.

The current version of Handbell Manager allows up to four eBells to be connected to one computer, but in principle this can be extended. Simon has experimented with six eBells and one computer, either connected to Ringing Room or just using local software to produce the sound. This could give a very cheap way for a whole band to ring handbells together in person. If each ringer uses their own eBells, there’s no need for anyone in the band to have a set of real bells.

The whole project has been a fascinating adventure and it’s extremely satisfying to be helping people to keep ringing during the pandemic and to develop their handbell ringing. In this age of manufactured goods, which most of us give little thought to the production of, it has been a real eye-opener to appreciate how much work is involved in the progression from prototype to product. In keeping with these online times, most of the four of us have never met each other in person, although there have been too many emails, Zoom calls and Facebook chats to count. Maybe in 2021…